The almost accurate history of IPA 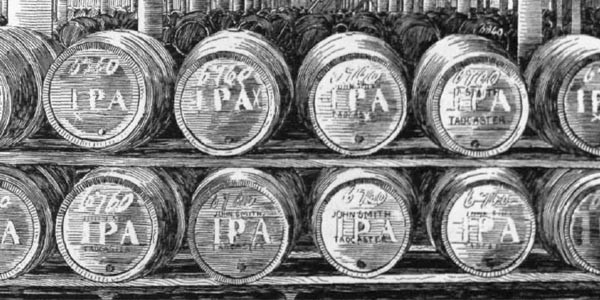 March is an exciting time to be a brewer. It’s the time when the next harvest of US hops start to arrive in the UK, flooding the market with the dank, piney, grapefruity hops that have given beer a new lease of life.

Many breweries celebrate the shipment with special beers – Magic Rock’s Unhuman Cannonball being the most famous – and it’s safe to say it’s IPAs that are on most brewers minds. But what is an IPA, and how has it changed since the US hops shook up the brewing scene?

There isn’t much argument about what constitutes an IPA (until you start talking about black ones) but its origin is shrouded in mystery – or rather misinformation. We have to thank the unstoppable and endlessly patient Zythophile for wading through the trub and finding actual evidence to separate myth from truth.

The story has to start with Pale Ale, a generic beer that has been brewed for thousands of years. In fact, the very first beer brewed by Sumerians 7,000 years ago was probably pale because it was "made" (or rather accidentally created) with air-dried rather than roasted malt.

Now, in the UK, air-drying was harder because it rains the whole time. So usually we roasted our malts to dry them, which along with London’s hard water explains why we used to make a lot of porter. We got the technology to brew pale beers in the mid 17th century, and were exporting it to our settlers and soldiers in the East by the 1711.

So other than the fact it was sent to India, what makes India Pale Ale different? The answer isn’t strength (it was probably pretty weak compared to many dark beers) but the amount of hops. We have evidence that at some point in the mid 1700s brewers realised that hops have preservative qualities. The acids in the beer make it a harsh environment for bacteria that could grow easily as the barrels warm up and cool down on the journey across the sea.

As a result there are documents that encourage brewers to add hops to their beers to protect them, one . We also know that Burton Brewery, which brewed in Bow in the late 1700s and is often cited as the inventor of IPA, was dry hopping its beer and even calling it East India Pale Ale in 1835. It’s also interesting to note that in his book “A Treatise on Food and Diet” Jonathan Pereira says that an IPA should also be “carefully fermented, so as to be devoid of all sweetness, or, in other words, to be dry” – so the use of caramalts in the US are an affront to our British dry palates. Even if they are sometimes delicious.

So there we have a brief, probably inaccurate history of the IPA. What we are left with is the question of what IPA will become. We have fruit IPAs, black IPAs, Belgian IPAs, session IPAs, double IPAs, Imperial IPAs… it seems the future is as hazy as the past.